Standing on the Sidelines - a Much Fairer Approach to Assessment

It’s the Easter Holiday. I’m sitting at home looking out at the third day of persistent rain and wondering; wondering whether I’ll get out at all during this holiday, yes, but also reflecting on a fairly momentous term for me.  I’ve just taught two classes in parallel, in different age groups but in different ways, and it really brought into focus something which had been troubling me for a while.
If you’ve followed the journey my S2 class have taken when working with ‘Inanimate Alice’ you will know that I’ve been very aware of the ‘hands off’ approach required at times even though that controlling teacher’s voice kept shouting at me to intervene. In complete contrast, the S3 class, one year older, had to produce a Folio of five written pieces for their English Standard Grade. Ideally this would be the best five pieces over two years but this ‘low ability’ set had, shall we say, dragged their heels.
This juxtaposition of 'hands on' and 'hands off' assessment is ludicrous. The S2 class spent three months working on Digital Narratives: each produced a blog, in which they reflected on their learning; an imaginative piece, where they produced their own written episodes of ‘Inanimate Alice’; and Digital versions of their next episodes of Alice. All completed after an initial study of the first four episodes of ‘Inanimate Alice’ and with little input from their teacher, beyond support and encouragement. 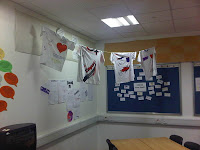 The older class were duty bound to produce five more or less identical pieces in order to satisfy the criteria of the English Standard Grade Folio. The tragedy of the Folio system – whether this was the intention or not – is that we know what the final product should look like before we even get there. These kids will produce slightly inferior versions of what we want them to produce and they’ll know it; despite also producing some wonderfully creative T-Shirts before Christmas. Something has to change. Is Curriculum for Excellence capable of providing that change? I think that really needs to be up to us, the teachers.
If the current crisis in Education in the USA is anything to go by - see Diane Ravitch's excellent piece on Obama's education policy in Newsweek - and Michael Gove’s new 'modern' approach to educational policy comes to fruition in England, we may be faced with greater testing, not less. When belts are tightening, grades and numbers, for some reason, become more important. We teachers are asked to justify what we do even more than ever. So, keep your nose clean, your head down, don’t rock the boat.
No chance. Shout from the rooftops. If Curriculum for Excellence is to mean anything then it should allow us to provide our students with meaningful learning experiences. The ending of the learning  ‘journey’ should be unknown but worth it; the journey itself, wonderful. If I’ve learned anything over the last three months it is that if we can find a task that will engage our pupils, one in which they can discover their ‘flow’, their ‘sweet spot of learning’, then we should step back and let them get on with it. Keep away from the building, nothing to see here.
Posted by Another Rambling Teacher at 09:12