Today we are learning to...ask questions 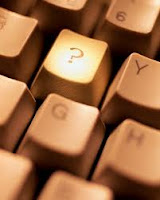 Can I be quite controversial here and say that I’ve always been a little disconcerted by Learning Intentions? Not that I’ve anything against intending to learn in the classroom, or even allowing the students in front of me to learn. Indeed, on some days I think it is a positive thing. It is, however, the very prescribed nature of how they are used and how we seem to have taken Dylan Wiliam’s original intention (Learning Intention) a bit too literally which discomforts me.
I had the recent pleasure of mentoring a student teacher who, I’m sure, will go on and be a fabulous educator. She worked closely with my lovely S1 class (eleven and twelve year olds) and they did some great work together. By the time her assessed lesson came around – or ‘Crit’ as some of you may better know them – she was well-prepared and ready to go. Indeed, the lesson appeared to go very well and I caught some the kids leaving class beaming widely and giving me the ‘thumbs up’. ‘She got the job’ said one of them, endearingly.
The feedback session, at which I was present, took me by surprise though. Student had not spent enough time talking through each of the three Learning Intentions. Even less going through each of the success criteria at the end. My God, I thought, how much time would there be left for teaching? I want the kids to know what they are learning, of course, but are we not getting bogged down in an overly homogenous approach to lesson planning? Over planning your lesson to the point where you are limiting yourself to two or three ‘things to learn’  is, in my opinion, a recipe for bad teaching.
Dylan Wiliam, to my understanding, asked us to think about the way we teach. I don’t think he envisaged a world where we would be saying ‘Today I am doing Assessment is for Learning’ or ‘Today I think I’ll do some of that co-operative learning.’ So what’s the answer?

Having just read Padgett Powell’s ‘The Interrogative Mood’ , a book in which every sentence is a question, I have begun to think carefully about the questions I use in class. Not necessarily questioning techniques- I happen to believe I’m pretty good at that- but the questions themselves.  Powell’s book is an infuriating thing, never seeming to be going anywhere but, for some reason, it works. The questions, seemingly unlinked in anyway, got to me at times, and the book began to make sense. It reminded me that the questions we formulate for our classrooms should supersede any Learning intention we might be tempted to write on the board.
Mike Schmoker, in his sometimes controversial but always thought-provoking book, Focus, says: ‘The quality and availability of good questions is essential to engagement and interest as students read, discuss and write.’
What if the most important part of any lesson or course was a series of well thought through questions which we would expect our students to be able address (not necessarily answer) by the end of their learning?  Just asking...
Posted by Another Rambling Teacher at 11:30