I received some fantastically supportive comments on my last ‘Alice’ Blog post. Most astonishingly for me anyway, a direct response from Kate Pullinger, the original writer of ‘Inanimate Alice’. A convincing argument for a global classroom if ever there was one. Within minutes, yes minutes, of posting my Blog  on Twitter I was receiving messages from interested teachers from around the world. My work was posted on FACEBOOK – never been a fan, slightly changing my mind now – so I knew things were happening.
Some of my first thoughts and ideas on what to do with ‘Alice’ came from a Scottish educator, Dave Terron, someone I shamefully failed to mention in my first ‘Alice’ post, and someone who , if you’re an English teacher in Scotland – or anywhere for the matter - you should be listening to and reading. He was kind enough to send me some of the things he’d gathered together in order to complete some excellent work with one of his classes. Without his help, I never would have undertaken this project. So thanks, Dave. 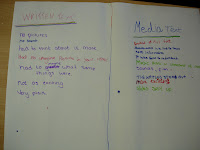 The great feedback I’d received found me bounding into school on Monday morning. However, it was the eagerness of the students on Monday which convinced me ‘Alice’ was working. The main ideas they had gleaned from last week were the differences between the written and the visual. While they insisted on calling ’Inanimate Alice’ a ‘Media’ text – perhaps later we could discuss the difference between ‘Media’ and ‘Digital’ - on paper, they did think that, in some ways, they had to work harder to access the story. Black writing on a white background meant that they had to create the visuals themselves in their own imaginations; but they now had a better idea of what ‘baxi’ was, and were developing an awareness of how sound was being used to manipulate them as readers. The silence at times, contrasted with the fast-paced modern beat when excitement mounted. Words like ‘discomfort’ and ‘fear’ were mentioned during the ‘static electricity’ scenes. 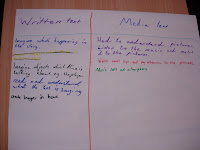 The students just got it. On Friday, after a hard day’s bargaining to book a trolley full of netbooks, I took a step back – or was told to by them – as they got into Episode Two – Italy. It was amazing. I’d tried hard to learn how to use a digital projector the week before, but before I could get to grips with these new fangled netbooks, they practically pushed me aside to get on with it. We agreed that the only three headings they would have in their notebooks would be SOUNDS, WORDS, SIGHTS: and away they went. The added value of interactive games – even on this simple level – grabbed them and the lesson was amazing. There are times in every teacher’s year when you remember exactly why you got into this teaching game.  As I stood back and watched my class, all wearing headphones, glued to their screens and furiously scribbling at the same time, I thought just that. Full engagement; high challenge; relevant. It doesn’t get better than this.
So what did I learn this week? 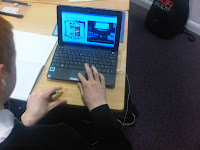 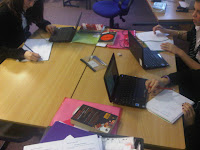 ·         However, having said that, the beauty of ‘Inanimate Alice’ is the value the students themselves bring to the table. Even the quieter ones have great things to say and I need to remain flexible and allow the lessons to move in their own direction, to an extent. Isn’t it so dispiriting when teachers don’t see what they think they should be seeing and are, ultimately, disappointed? The creativity of my students is coming to the fore and I will let them amaze me – no matter how tempted I am to jump in and join in the fun.
Next week? The class will be blogging about their ‘Alice’ experience on GLOW. I may well share some of those thoughts with you.
Posted by Another Rambling Teacher at 08:31